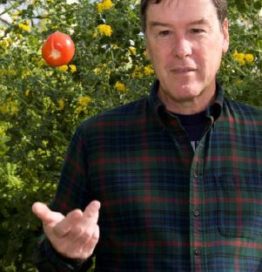 Dr. Harry Klee holds the Dickman Chair for Plant Improvement at the University of Florida (UF) in Gainesville. Harry earned a bachelor’s degree in psychology and then a PhD in biochemistry from the University of Massachusetts, Amherst. He did postdoctoral research on Agrobacterium tumefa-ciens at the University of Washington with Eugene Nester, working on the mechanisms of crown gall tumor growth that led to characterization of the Agrobacterium auxin and cytokinin biosynthetic genes. Harry moved to Monsanto in 1984. There, he developed technologies for plant transformation and trans-gene expression and was part of the team that developed Roundup-resistant cotton, canola, and soybean. He continued work on the mo-lecular biology of phytohormones, pioneering the use of transgenic plants to elaborate in vivo hormone function. In 1995, Harry moved to UF. There, he established a program to understand the biochemistry and genetics underlying flavor in tomato and other fruit crops. Harry was elected a fellow of AAAS in 2009 and to the National Academy of Sciences in 2012.